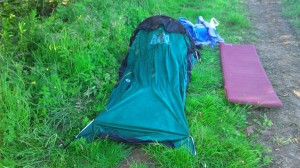 Initiallly, it was not my intention to carry “camping” equipment because I believed that in Europe it should be no problem to find pensions / guest houses or albergues. But latest when the lady from the St. Jaques association in Aachen told me that she couldn´t provide me any accomodation information at all and that to her knowledge overnight stay in Belgium and France could become complicated, my instincts told me to order in the last minute a 1,1 kg bivouac from Amazon, to have at least a back up solution. 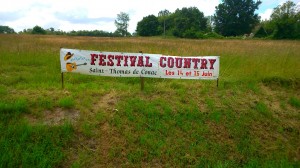 It turned out that this has been one of the wisest decisions of this journey because accomodation and supply, at least on this route, in wide parts of France and Belgium were a disaster and I had to sleep about 80% in the fields. In some regions, particularly south of Paris, I thought that this must be a bad joke and that I am not longer in Europe rather than somewhere in the Mid-West of North America. Compared to this, Spain is Paradise, where you have villages almost every 5 km and even the smallest ones have several albergues / pensions and supply shops. So, who just does the Camino Francés (which most people do) doesn´t need camping stuff and a 30 l backpack is good enough. 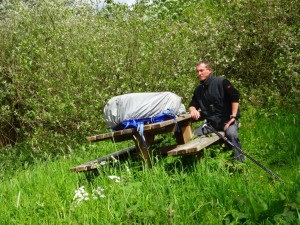 Unfortunately, together with a sleeping back, inflatable mattress (even the thinnest and less confortable one) and a larger backpack size (60 liters) this gives you additional 4 kg. So, backpack and camping equipment is about 6 kg plus clothes and electronic equipment makes it 12 kg plus eventually food and beverage 14 kg, which is too much but I think there is no other way. Also the bivouac is very light and easy and fast to assemble but you can´t avoid that its shell has contact with the sleeping bag and as the shell, even when it is not raining, is always wet because of the moisture, the sleeping bag also is wet in the morning. But it helped me a lot one night before Bordeaux, where the climate was more tropical and the air full of small biting insects, which would have eaten me alive that night, if I hadn´t had the bivouac to protect me. 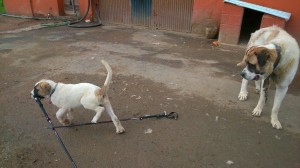 When you research the internet and talk to people, the major opinion is that walking sticks don´t make too much sense if you are walking on plain territories. However, don´t ask me why, I decided to take them and would always repeat to do so. Im my view you walk faster and more harmonic. I used 250 grams micro sticks, that you can bend but not vary the length. 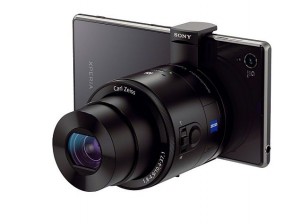 When weight and size becomes an issue, this is an interesting new device from Sony. It looks like a lense but is a full cybershot, with a larger image sensor than most smartphones and a zoom. You can either fix it on your smartphone or place it somewhere around you, either directly on the ground or on a tripod and you will see what it sees through the display of your smartphone. Communication is wireless but you don´t need internet, thanks to NFC. In principle, it works with any NFC – capable smartphone but I opted for the Xperia to avoid any potential uncompatibility issues. In each country I bought a local Sim card for phone and internet, which is cheaper and brings you online all the time. In Spain almost all accomodations, bars, restaurants and public entities provide free wifi internet access. 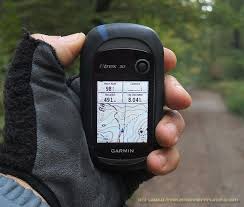 In Spain you probably don´t need either GPS or maps, singage is excellent and very often you just have to follow the crowd. In France, Benelux and Germany signage is scarce and the tricky thing is to avoid the national highways on the one hand and too large detours on the other hand. Unfortunately you won´t find trails or smaller ways parallel to the larger highways. You could do this with a map but it would take you a lot of time you don´t have and the map is large and not very practical. In this sense I was happy to have the Etrex with maps I downloaded prior to this journey from the open street map project. The internet is full with tracklogs for the Camino Francés in Spain but I was surprised how hard it was to find tracklogs for the other ways. Finally I found a dutch site with an almost comlete set of downloadable St. James ways in Europe. As everything was so fast, I forgot the domain address but when I remember it, I will post it here.